Luxembourg among the first signatories of the Artemis Accords 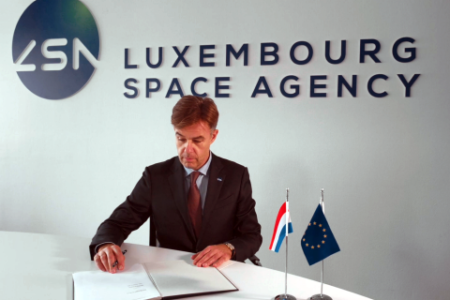 Australia, Canada, Italy, Japan, Luxembourg, the United Arab Emirates and the United Kingdom are, together with the United States, the founding member nations of the Artemis Accords. The virtual signing took place yesterday at the 71st International Aeronautical Congress. Minister of the Economy Franz Fayot signed the Accords on behalf of Luxembourg.

NASA announced it was establishing the Artemis Accords earlier this year to guide future cooperative activities, to be implemented through bilateral agreements that will describe responsibilities and other legal provisions. International partnerships will play a key role in achieving a sustainable and robust presence on the Moon later this decade while preparing to conduct a historic human mission to Mars. The partners will ensure their activities are guided by the Accords in carrying out future cooperation. International cooperation on Artemis is intended not only to bolster space exploration but to enhance peaceful relationships among nations.

Minister Fayot said: “It is a great pleasure for me to sign the Artemis Accords on behalf of Luxembourg. The Artemis Accords integrate very well with the efforts Luxembourg has been making both nationally and internationally to support the peaceful exploration and sustainable utilisation of space, and more specifically, space resources for the benefit of humankind.”

The Artemis Accords integrate very well with the efforts Luxembourg has been making to support the peaceful exploration and sustainable utilisation of space.

Minister Fayot went on to outline and reiterate Luxembourg’s position as a leading player with its numerous space initiatives to date. “With its SpaceResources.lu initiative launched in 2016, Luxembourg’s strategy has always been to strengthen the space sector and promote international cooperation. This by undertaking concrete actions and measures in the fields of regulation, education, research, innovation and long-term funding. We are convinced that the Artemis Accords will lead to valuable knowledge sharing and technical understanding of the key issues, which, in turn, will further discussions and progress towards an international framework to be developed at the United Nations.”

The Artemis Accords reinforce and implement the 1967 Treaty on Principles Governing the Activities of States in the Exploration and Use of Outer Space, Including the Moon and Other Celestial Bodies, otherwise known as the Outer Space Treaty. The Artemis Accords also reinforce the U.S. and partner nations’ commitment to the Registration Convention, the Agreement on the Rescue of Astronauts, and other norms of behavior that NASA and its partners have supported such as the full and public release of scientific data.

Luxembourg has a thriving space industry and research community, fostered by government policy designed to encourage high tech industry – space in particular. Over the past four decades, the Luxembourg space industry has grown significantly. The country hosts world leaders of satellite-based communications and is home to other highly advanced technology companies. Luxembourg is strongly engaged in research and development activities and supports industry providing products and services in areas such as telecommunications, earth observation, navigation and security.

The Accords represent the beginning of an open and inclusive dialogue originating from a very ambitious space programme.

“In the next months, the Luxembourg Space Agency and NASA will further explore concrete opportunities for cooperation within the Artemis programme, defining Luxembourg’s contribution to the programme based on our existing and future capacities,” Minister Fayot concluded during his speech broadcast at the IAC. “This in areas such as prospecting of resources, surface mobility and operations, and energy. We are proud to be part of the first group of countries signing the Accords. They represent the beginning of an open and inclusive dialogue originating from a very ambitious space programme. There are many challenges on the way which we can only overcome by working inclusively together with other countries and by looking for new innovative solutions.”

Marc Serres, CEO of the Luxembourg Space Agency added: “The Artemis Accords endorse the approach taken since 2016 by the Luxembourg Space Agency with its SpaceResources.lu initiative aimed at the peaceful exploration and sustainable utilisation of space resources. We look forward to the ongoing exchange of information and expertise with the 8 founding partners. The opening in Luxembourg by the end of 2020 of the European Space Resources Innovation Centre in partnership with ESA and the Luxembourg Institute of Science and Technology will further enhance international cooperation, scientific knowledge sharing and research together with the establishment of an in-space economy.”