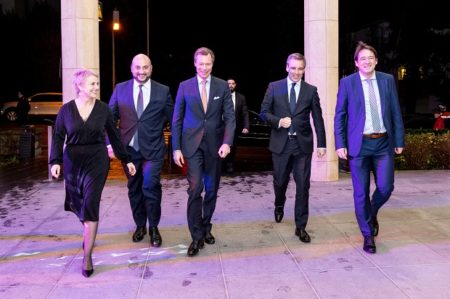 On 14 November 2019, Luxinnovation, Luxembourg’s national innovation agency, celebrated its 35th anniversary in the presence of His Royal Highness the Grand Duke. The agency was created in 1984 as a first “innovation and research entry point” in Luxembourg, providing advice and support to companies wishing to launch R&D and innovation projects.

A few years later, the agency expanded further and was entrusted with the management of the Luxembourg Cluster Initiative covering the key sectors of the national economy (automotive, clean technologies, creative industries, health technologies, materials and manufacturing, and wood), all with an increasingly strong ICT cross-sector component. To date, more than 700 companies are grouped together in the Cluster Initiative.

Thanks to Luxinnovation, research and development and innovation have evolved in an unparalleled way in Luxembourg.

Luxinnovation is also the national contact point for companies wishing to integrate European R&D programmes: a key competence that earned Luxembourg the highest success rate in the European Union in 2018 in the context of calls for funding under the Horizon 2020 framework programme.

“Thanks to Luxinnovation, research and development and innovation have evolved in an unparalleled way in Luxembourg and probably even in international comparison over the past three decades,” said Deputy Prime Minister and Minister of the Economy Étienne Schneider, in his opening speech to celebrate the 35th anniversary of Luxinnovation, before nearly 500 guests. “Due to its evolution over time and its expanded missions, Luxinnovation is and will remain an essential driver of innovation and economic success in the country.“

In 2016, Luxinnovation was given the additional mission to take part in the international promotion of the Luxembourg economy, a task which includes identifying and supporting foreign investors who would bring real added value to the national economy by consolidating the country’s qualitative development. The agency also started monitoring the economy in sectors and activities likely to create new opportunities for companies already established in Luxembourg and to attract new foreign direct investment.

We want to be more than ever recognised by companies and entrepreneurs as a trusted partner for them.

“In the coming years, Luxinnovation must inspire our companies to innovate, grow intelligently and be well prepared for the challenges of the future, with new and partly also disruptive technologies,” explains Sasha Baillie, CEO of Luxinnovation since May 2018. “We want to be more than ever recognised by companies and entrepreneurs as a trusted partner for them, enabling them to find pragmatic solutions for innovative development projects.”